My interview with Erin Watt : discover more about the Royal Series, One Small Thing and much more

First of all thanks a lot for answering my questions.
French readers know you thanks to the Royals series. Is it the first series you wrote together?

Yes! The Royal series was the first time we wrote together. We shared a mutual love of new adult books, but wanted to try something totally different than what we were writing. We wanted to write cracktastic stories, cliffhangers, and wild storylines.
How did you decide to work together?

We had a shared love of football and romance novels, and after exchanging multiple emails we decided to write the books that we wanted to read. After that, the plan for Paper Princess and the Royal series quickly developed.
How do you do to write together? What are your writing rituals?

We usually plan and plot the stories and series ahead of time, in detail. After that, we take turns writing about 2000 words each, and send chapters/scenes back and forth. Then we each take a turn editing the story, and sometimes we don’t even remember who wrote what!
Is is easier to write together or to write you own books as Elle Kennedy and Jen Frederick?

The process is very different when writing with another person. In some ways it’s easier and other ways it’s harder. You have someone to bounce ideas off of and help move the writing process forward. However, writing on your own is also rewarding in that we can each take our own time, and write the stories as they develop.

Is it easier to write a series together or standalones like One small thing or When it's real?

It’s easier to write the standalone books, because there aren’t as many plot points and subplot threads that need to be managed and kept track of.
How would you define One Small thing, your upcoming novel?

It’s a book about struggle, second chances, and forgiveness. Both the hero and heroine have to overcome obstacles in their path, and the friendship they develop helps them come to terms with elements of their past.
Can you introduce your main characters Beth and Chase?
Beth is sick of living in her sister’s memory, resentful of her parents, and ready to just do something, anything, to feel like her own, separate person.

Chase is ready for a fresh start. He’s got his own demons and he’s afraid he’ll tarnish Beth if he lets her close, but he doesn’t want to let her go either. 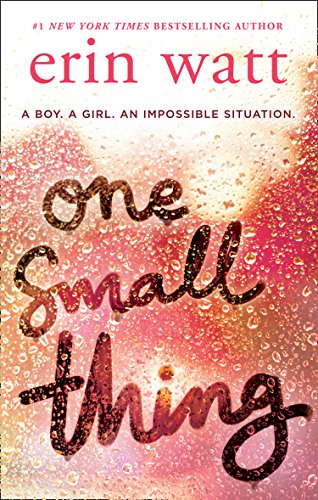 Why did you choose to create a novel where forgiveness , guilt and bullying is present?

We wanted to create something that felt real. Guilt, forgiveness – these are common emotions that we experience. Bullying is also a common theme we see with people our characters’ ages. We wanted a book that you could escape into, but where you could also relate to the characters and their struggles.
What are your characters' force and flaws?

Chase’s strength is his resilience, but his flaw is not being able to forgive himself for past mistakes. Beth, on the other hand, has the strength of forgiveness. And her biggest flaw is acting impulsively.
Let's talk about Scarlett and Jeffrey . They are secondary characters but so important for the plot. How will they interact with our heroes. What is their role?

Scarlett and Jeffrey impact the plot in an important way, but it’s hard to get into detail about it without spoiling the book!
What would you do if you were in Dave and Marnie's shoes? Would you act as they did?
Everyone deals with loss and grief in their own way, and Beth’s parents Dave and Marnie haven’t handled theirs in a way that Beth understands. Their added fear of going through it again made them pretty extreme. While we don’t think we’d react in quite the same way, we’d be very happy to never find out.

What is the One small thing that make you smile? Cry?
We can’t answer this without revealing spoilers!

Was there a scene which was hard to write?

A lot of the scenes were difficult to write due to their specific content. Some of the heavier emotional scenes, and abuse scenes, for sure. It’s difficult sometimes to work out how to get a message through without losing focus of who your readers are.
Did you "delete" a scene and if so why?

There’s always a deleted scene in every book. Sometimes you realize it’s just unneeded, and sometimes you decide to take the story in a different direction. The key is that by deleting it you’re making the book better.
You attended your first signing at Apolicon in Washington this year. Will French readers will be able to see you one day in France for a signing?

We hope so! We would love to travel more and meet more of our international readers. We don’t have any immediate plans to come to France, but we hope to someday!
Do you have a last word for your French readers?

Thank you so much for reading! We love that readers from all over the world have been able to fall in love with our stories.