STROKE OF LUCK releases on February 19, 2019. Pre-order your copy today! 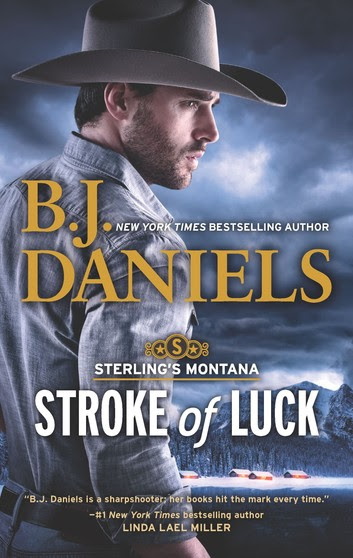 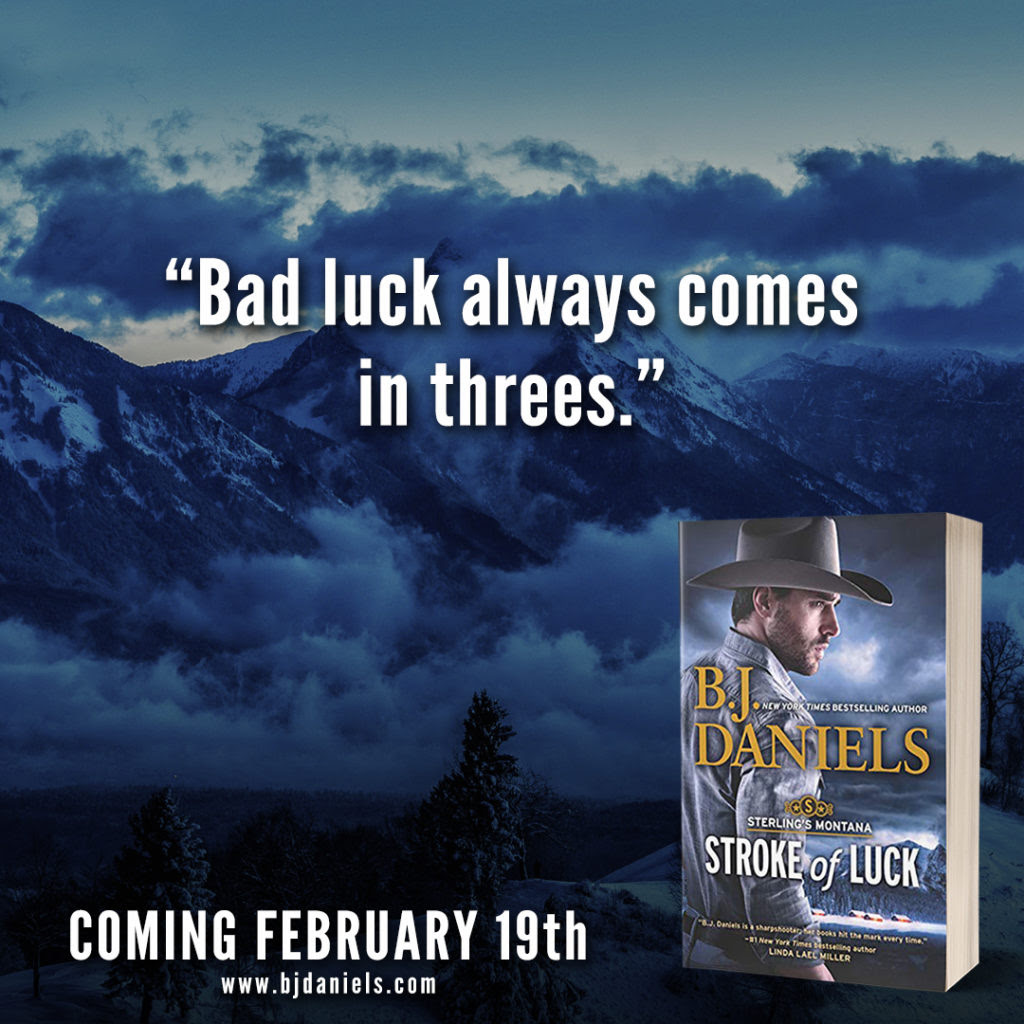 Add it to your Goodreads now!

“Bad luck always comes in threes.” Standing in the large kitchen of the Sterling Mon­tana Guest Ranch, Will Sterling shot the woman an impatient look. “I don’t have time for this right now, Dorothea.” “Just sayin’,” Dorothea Brand muttered under her breath. The fifty-year-old housekeeper was short and stout with a helmet of dark hair and piercing dark eyes. She’d been part of the fixtures on the ranch since Will and his brothers were kids, which made her invaluable, but also as bossy as an old mother hen. After the Sterling boys had lost their mother, Dor­othea had stepped in. Their father, Wyatt, had con­tinued to run the guest ranch alone and then with the help of his sons until his death last year. For the first time, Will would finally be running the guest ranch without his father calling all the shots. He’d been looking forward to the challenge and to carry on the family business. But now his cook was laid up with a broken leg? He definitely didn’t like the way the season was starting, Will thought as the housekeeper leaned against the counter, giving him one of her you’re-going-to-regret-this looks as he considered who he could call. As his brother Garrett brought in a box of sup­plies from town, Will asked, “Do you know anyone who can cook?” “What about Poppy Carmichael?” Garrett sug­gested as he pulled a bottle of water from the re­frigerator, opened it and took a long drink. “She’s a caterer now.” Will frowned. “Poppy?” An image appeared of a girl with freckles, braces, skinned knees and reddish brown hair in pigtails. “I haven’t thought of Poppy in years. I thought she moved away.” “She did, but she came back about six months ago and started a catering business in Whitefish,” Garrett said. “I only know because I ran into her at a party recently. The food was really good, if that helps.” “Wait, I remember her. Cute kid. Didn’t her father work for the forest service?” their younger brother, Shade, asked as he also came into the kitchen with a box of supplies. He deposited the box inside the large pantry just off the kitchen. “Last box,” he an­nounced, dusting off his hands. “You remember, Will. Poppy and her dad lived in the old forest service cabin a mile or so from here,” Garrett said, grinning at him. “She used to ride her bike over here and help us with our chores. At least, that was her excuse.” Will avoided his brother’s gaze. It wasn’t like he’d ever forgotten. “I just remember the day she decided to ride Lightning,” Shade said. “She climbed up on the cor­ral, and as the horse ran by, she jumped on it!” He shook his head, clearly filled with admiration. “I can’t imagine what she thought she was going to do, riding him bareback.” He laughed. “She stayed on a lot longer than I thought she would. But it’s a won­der she didn’t kill herself. The girl had grit. But I al­ways wondered what had possessed her to do that.” Garrett laughed and shot another look at Will. “She was trying to impress our brother.” “That poor little girl was smitten,” Dorothea agreed as she narrowed her dark gaze at Will. “And you, being fifteen and full of yourself, often didn’t give her the time of day. So what could possibly go wrong hiring her to cook for you?” 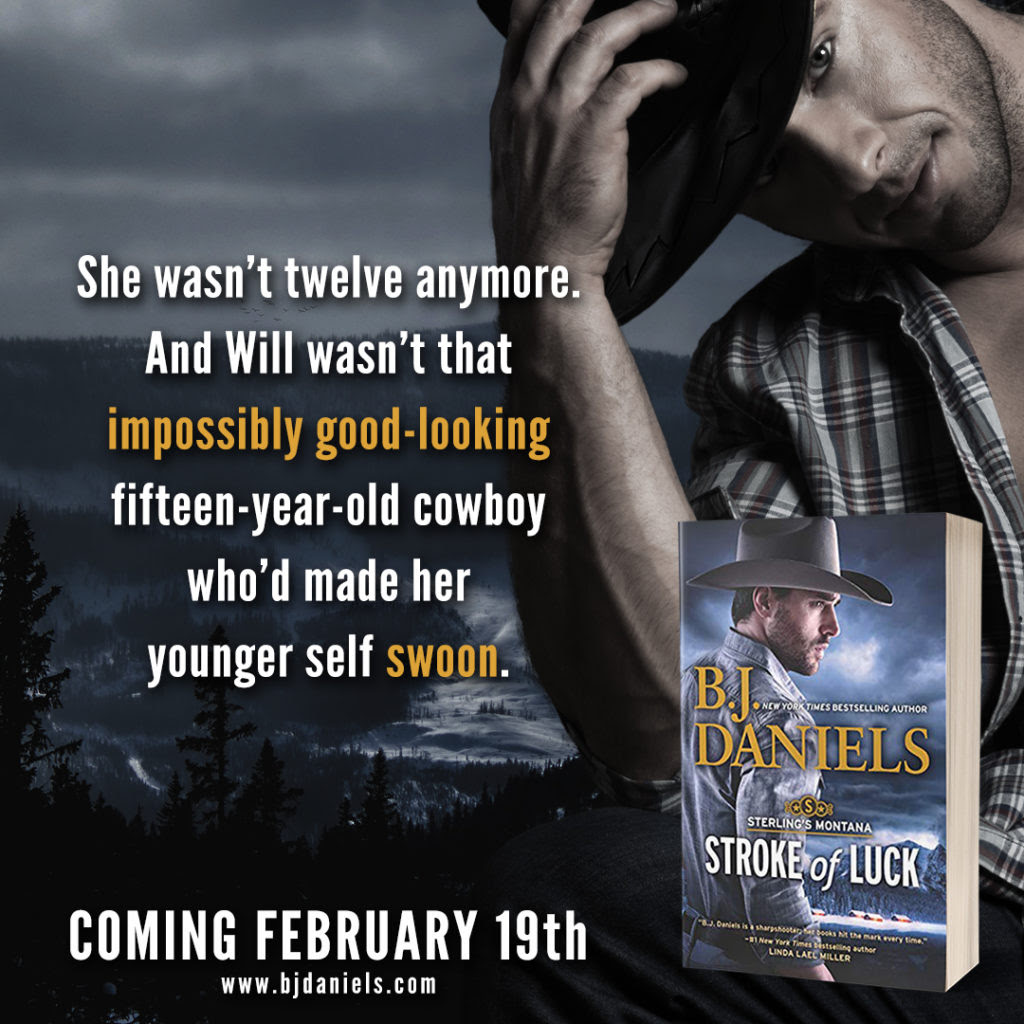 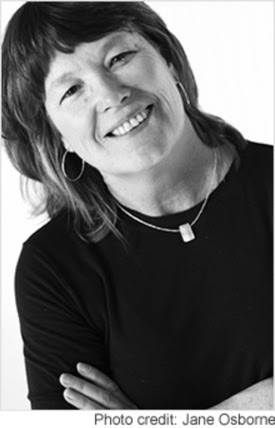 About B.J. Daniels: NYT and USA Today Bestselling author B.J. Daniels was born in Texas but moved with her family to Montana at the age of five. Her first home was a cabin in the Gallatin Canyon and later a lake house on Hebgen Lake outside of West Yellowstone. Most of her books are set in Montana, a place she loves. She lives now in a unique part of the state with her husband and three Springer Spaniels. When she isn't writing, she loves to play tennis, boat, camp, quilt and snowboard. There is nothing she enjoys more than curling up with a good book.