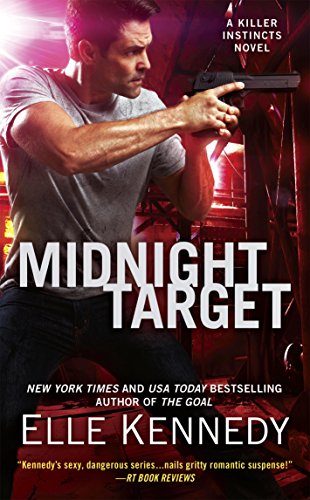 Four years ago, Cate’s entire life changed when she discovered she was the daughter of a supersoldier. But Jim Morgan’s overprotectiveness has pushed her away. These days, she’s working as a freelance photographer and living the dangerous life Jim never wanted for her.

When Cate snaps a photo linking a corrupt South American politician with the leader of a notorious drug cartel, her mercenary father leads a team to rescue her—only to get shot and critically wounded in the process.

As Morgan’s operatives rally together on a revenge mission, they’re faced with new alliances and old heartaches. Cate is forced to work with David “Ash” Ashton, the man who broke her heart two years ago, while Liam Macgregor and Sullivan Port resurface after years apart to finally try to deal with everything they’d left unsaid.

Soon it’s all-out war between the cartel and the mercenaries—with two couples caught in the middle of the blood feud. Love and redemption are within their reach...but first, they have to make it home alive.

Before I write my review , I'd like to thank Elle Kennedy and Nathash for their trust and for allowing me to read this novel as an ARC.

My review: Before I begin my review, I would like to give you some details. Midnight Target is the 8th volume of the Killer Instinct book series. I give you below the order of reading of the previous volumes if you read in english

I admit that by discovering that it was the 8th volume of a well advanced book series, I was a little afraid of being lost. So be reassured. Of course, we are spoiled on the previous couples but this does not prevent the reader to understand the reading. This book series reminded me of the I Team series written by Pamela Clare because adrenaline, danger, testosterone and the united teams are at the rendez vous. Elle Kennedy offers us with her series a thrilling and panting novel that made me want to discover the first 7 volumes.

Cate Morgan is the daughter of a mercenary, James Morgan, who leads an elite team. Having had a fairly difficult childhood, as soon as Cate entered the life of the old man, the only possible slogan was protection and even overprotection. Jim never wanted his daughter to remain close to his world because the danger was constantly at the rendez vous. However, when you prevent a woman with a strong character from doing what she wants, she never gives up completely. Moreover Cat became a free lance photographer and when she holds the scoop of her career, she does not suspect for a moment that she will trigger off a merciless war. So it's logical that she calls her father and her super team to get her out of trouble. But the mission will not be easy because they will face Mateo Rivera. The war that will affect both sides is just beginning. What I liked about Cate is the fact that she has temper and will try to stand up to her father. Everyone sees her as the little girl she was and they do not realize that by relegating her to the background, they will only stir up her anger but also her guilt.

But we can not talk about Cate without talking about David "Ash" Ashton, a young man who broke her heart two years ago. Cate and Ash were always very close and the friendship between them quickly changed into a completely different feeling. So when Cate offers him her heart and the latter crushes it without any remorse, things can only be complicated. And so the tension is palpable between these two heroes from the beginning to the end and it is thanks to many flashbacks that we have all the details about them. We discover therefore that Ash is not so immune to the charm of the young lady and if he constantly pushes her away by not hesitating to hurt her it is that he does not want to go against  Jim's desire for a normal, quiet life for his daughter. We feel the anger and frustration of Cate who would like to have her place in the team of mercenaries. She does not ask much: she just wants the opportunity to be listened to even if for this, she will have to hide her feelings for Ash.

Ash is a real killer on the field and he does not hesitate to face danger in all its forms. The various missions he has carried out have never been easy and we discover that he has always been close to danger. o we wonders why Ash does not have more "balls" when it comes to Cate and the "orders" of her father Jim. As I mentioned above, flashbacks allow us to see that Ash is not as indifferent  to Cate. It is true that he was 25 years old and she was 17 years old when they met, that it makes sense to wait for the majority of the young woman to try something but not despite the signs, Ash will choose the weakness and the cowardice. He obeys only the orders of his chief even if it has hurt the woman he has loved for years.

The positive part of this novel is also the fact that she does not just put two heroes in front of the stage but four heroes because besides the main plot where Cate plays the main role, there is also a subplo where two other heroes will have to face the unspoken truth. These are Sullivan Port and Liam McGregor. They clearly have a common past but also a passive. Thanks to some recaps of the previous volumes, we have information on the situation of the two men and it is obvious that things are far from being settled. As you can see, Elle Kennedy offers us M / M (a love story between two men) in the novel and although I'm not a huge fan of MM, I really loved the story Surrounding them. The sex scenes are very well written and one gets to perceive the emotions of the two protagonists. So it will be time to face their sexuality and assume their bisexuality to hope to move forward.

As I said at the beginning of my review, the Killer instinct series gathers everything I adore in this kind of novel. The action is thrilling and so we do not get bored for a second. The twists and turns are continuous, giving the perfect rhythm to the plot. Involving drug cartels or mercenaries implies that we will face heroes who will not fear anything to reach their target. The danger is permanent and we do not laugh with this kind of criminal. Violence is skillfully measured so as not to lose credibility and we hold our breath until the final outcome.

In short, if you read in english, I can only recommend you reading the Killer Instinct. series.  I sincerely hope that this book series will be published in France because it promises us good times. Elle Kennedy managed to plunge me into her book series and make me want to discover the previous volumes because all the characters promise us amazing stories. Midnight Target is therefore an exciting thriller and you can't  missed it.

To order this book click on the Amazon widget