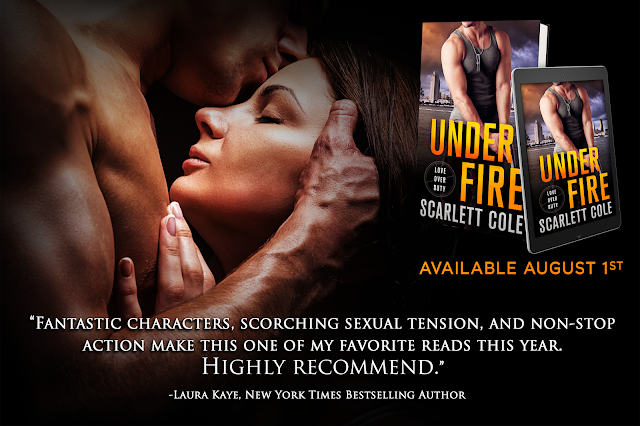 HE CAN TAKE THE HEAT.
Hot, hard-bodied Sixten Rapp is a former SEAL who’s raring to begin his brand-new civilian life. He and his Navy “brothers” start a security firm that offers the kind of services only a team of military-trained professionals can provide. But nothing prepared Six for his new client: an innocent woman on a mission to improve thousands of lives. . . unless someone takes hers first.

CAN SHE HANDLE THE FLAMES?
Dr. Louisa North knows time is against her as she tries to create a “miracle” medical treatment for a disease with no known cure, until she creates a sample so powerful that the wrong people want to use it as a chemical weapon. At first, Six is unwilling to accept Louisa as his client. But soon he realizes that the danger is real and that there’s much more to this plain-Jane scientist…including a burning passion between them that neither of them can resist. And now that an enemy is on Louisa’s trail, Six will do whatever it takes to protect her―or die trying.

“Tell me again why you are here.”

She was cute when she was prickly. He reached forward and pulled Ocean’s Eleven, the original one, from a category titled Capers, and handed it to her.

“I heard it’s movie night at the North house, so figured I’d come hang out.” He moved to the sofa, flopped down, and placed his boots on the glass coffee table.

Once the movie started, she came and sat by him, and he did his best to ignore the way her shorts rode up her thighs. He spent more of his time with company in his bed than not. And that company, whoever she was that given day, usually had no issue whatsoever dropping her clothes the moment she stepped through his door. So naked skin he was totally down with. Yet somehow, just that tiny bit of extra flesh had him feeling giddy, like he was the boy who’d lost his virginity in less than two minutes giving it to Jessica McKade.

Louisa slapped his thigh. “At least take your shoes off,” she said before she stuck her hand in their popcorn.

“Yes, ma’am,” he said, sitting forward and toeing his boots off.

A week ago, he couldn’t have imagined himself ready to take orders again so soon, but back then, he hadn’t met Louisa North.