My interview with the amazing Kristy Bromberg

Hi Kristy , first of all I'd like to thank you for accepting to answer my questions for my french blog.

Driven has been released in France a few months ago and it was immediately a huge success. According to you why are readers instantly falling in love with Colton and Rylee's story?

A: I think there is a vulnerability to Colton that readers can sense beneath the rough exterior. He brash and arrogant but that first scene where he meets Zander and you know there is so much more beneath the surface. I think that is the draw for readers to Colton.

How did you imagine these characters? Tell us about the process of creating them

A: Colton just kind of popped in my head and the more I thought about him, the more his character evolved… and then I couldn’t stop thinking about him. So he’s kind of been a constant on my mind for over 3 years.

As a writer have you got any specific technics before writing a new tome?

A: I outline heavily. I like to know the whole story before I start. And then I love the little surprises that happen when I write and veer from my outline. So for me it’s outlining.

How do keep in mind all the details mentioned about any characters in the previous tomes?

A: When I wrote Driven I had a notebook with all the specifics. But now, I’ve been writing them for so long that it’s just second nature. When you write characters like these, they are never far from your mind so a lot of the nuances you think you’d forget, you actually don’t.

What was the most difficult part when you wrote this saga?

A: Addressing Colton’s past and Rylee’s career. I wanted to be sensitive to the subject matter BUT I also didn’t want to sugarcoat it.

Have you got a favorite character or a favorite tome in the whole saga?

How did you imagine this awesome expression such as "I race you Rylee" or those referring to these superheroes?

You know, I have no idea. One day when I was almost finished with Fueled, I thought of these ideas an had to go back and write them in the story because they fit perfectly.

Did you do some research before writing the stories of Rylee and Colton?

Aced will be released in France on March 17th. It's a wonderful story with deep themes. Was it important for you to talk about such important themes for a woman?

A: Yes. I think the issue I address in Aced is something that rarely gets talked about and I feel like I shouldn’t shy away from it just because it might upset some people. With the US release, I’ve had more women thank me for talking about it.

What were your readers' reaction when Aced was published on January 11th?

A: They said reading Aced felt like coming home to their family. That while the book was emotional, it was also huge in showing a real marriage and the growth in the characters as well.

You're very close to your fans. Is it important for you to get in touch with them?

A: Always. Without my readers, this wouldn’t be happening so my every day interaction online and in the Driven group is huge to me. Plus it keeps me motivated and inspired to keep writing quality books.

French readers are looking forward meeting you so do you think we'll be able to see you soon in France?

A: I’d love too. I’ll be in the UK in June of this year and then I’ll try to figure something out for more overseas travel. I have (3) young children (ages 5, 7, 10) and so when I travel it disrupts everything with them…so I find it hard to travel for long lengths of time.

Did you create yourself the covers for the various tomes of the Driven saga?

A: I worked with a cover designer for the books but I sent her the images…. Driven was the first book I’ve written so I didn’t know much about covers. I’d love to redo them and give them a facelift of sorts since they’ve been out for a while now… we’ll see if I do. 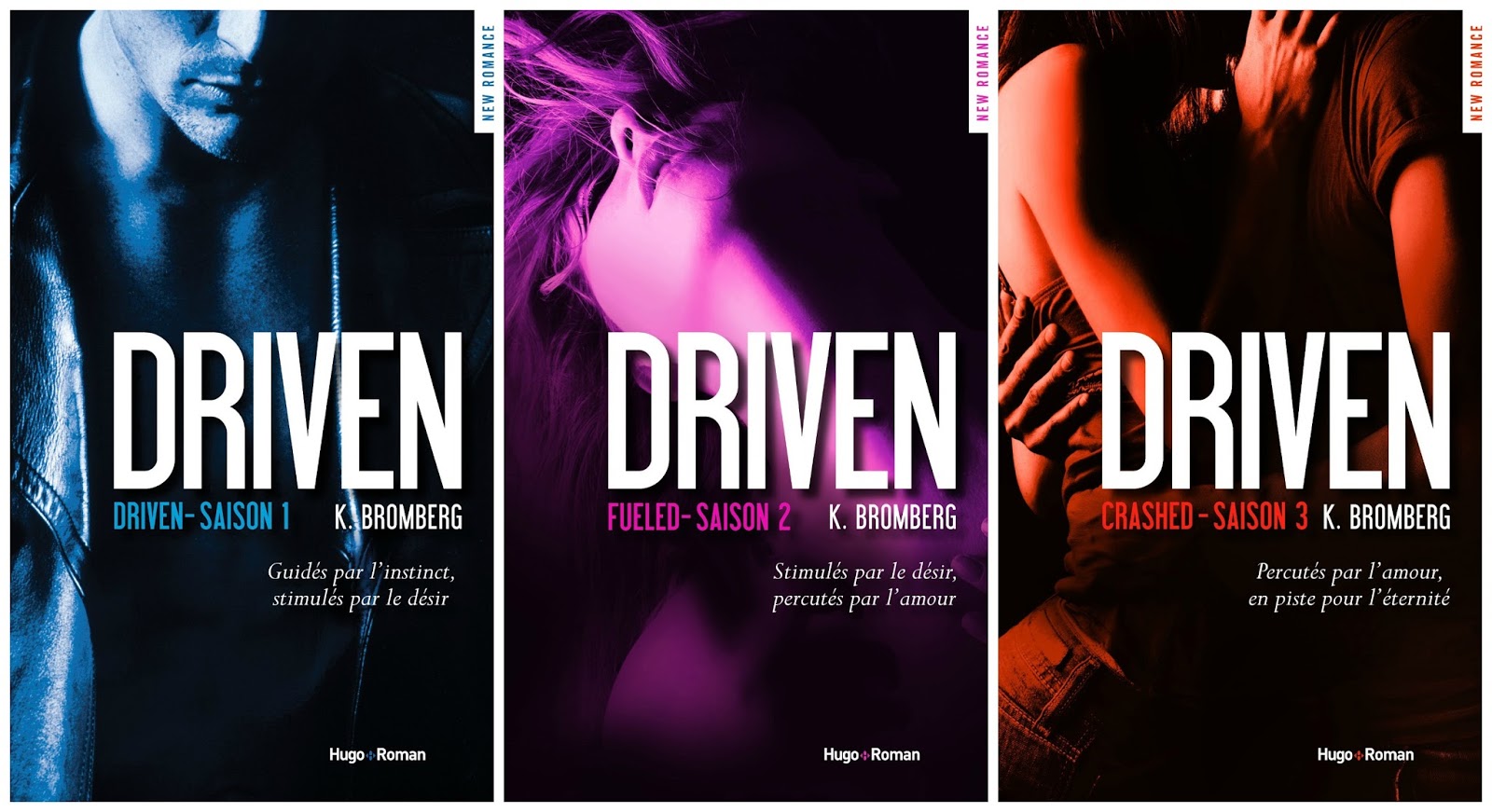 What do you think about the French Covers for Driven , Crashed, Fueled , Aced and Raced?

A: I LOVE Them!!!! A lot of readers love the French covers. I think Hugo did a great job with them!

Why did you choose the racing competition as the background of your stories?

Can you tell us a bit more about Raced which is an unusual tome which will be released on April 21st in France?

A: Raced is a series of individual chapters from all three books (Driven, Fueled, and Crashed) retold in Colton’s point of view. There are also 2 new chapters in there as well. Readers were really wanting to know what Colton thought or felt in certain chapters so I figured, why not give it to them. We also learnt recently that Hard Beat, Sweet Ache and Slow Burn , spin off about Haddie , Becket , Quinn and Tanner will be released in France. Can you say a few words about these spin off?

Slow Burn: very emotional, very real, but you fall so in love with Becks and his persistence. You become a little frustrated with Haddie but readers who have been through what she goes through in the book said the emotions are spot on.
Sweet Ache: I love Hawkin. He’s this bad boy rocker who only wants to help his family. And Quin is feisty and carefree. This book also deals with an issue that affects many people.
Hard Beat: I love this book. It’s a different feel than the other books and has a lot of twists and turns. Just when you think you have it figured out, you don’t.

You're currently writing a new tome on Zander. He is such a lovely character with a troubled past. What can we expect from this tome?

A: Zander is all grown up and we get to see him face his past as well as help Getty (the love interest) deal with hers. I just finished it and I’m pleasantly happy with how it turned out.

Is there any hope for the Driven saga to be adapted on the big screen?

A: Would it be awesome? Yes. Will it most likely happen? No. It’s a lot of books and words to translate over to screen and I don’t think a studio would take that much of a risk in 5 romance genre books. BUT we can always hope.

Thanks a lot Kristy.

Thank you so much everyone!!!