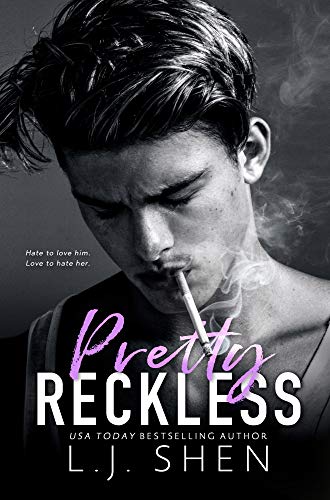 They say revenge is a dish best served cold.
I'd had four years to stew on what Daria Followhill did to me, and now my heart was completely iced.
I took her first kiss.
She took the only thing I loved.
I was poor.
She was rich.
The good thing about circumstances? They can change. Fast.
Now, I'm her parents' latest shiny project.
Her housemate. Her tormentor. The captain of the rival football team she hates so much.
Yeah, baby girl, say it--I'm your foster brother.
There's a price to pay for ruining the only good thing in my life, and she's about to shell out some serious tears.
Daria Followhill thinks she is THE queen. I'm about to prove to her that she's nothing but a spoiled princess.

Everyone loves a good old unapologetic punk.
But being a bitch? Oh, you get slammed for every snarky comment, cynical eye roll, and foot you put in your adversaries' way.
The thing about stiletto heels is that they make a hell of a dent when you walk all over the people who try to hurt you.
In Penn Scully's case, I pierced his heart until he bled out, then left it in a trash can on a bright summer day.
Four years ago, he asked me to save all my firsts for him.
Now he lives across the hall, and I want nothing more than to be his last everything.
His parting words when he gave me his heart were that nothing in this world is free.
Now? Now he is making me pay.
Release Date : April 29th
Price : 2.99 euros
Pages : 386 pages

Before starting my review, I'd like to thanks Sarah at Social Butterfly PR for allowing me to read this 1st tome as an ARC.

My Review: I loved the Sinners of Saint series so you can imagine how happy and impatient I was to discover the stories of our dear Hotholes and the least we can say is that the Totholes are the worthy heirs of their dear parents. This volume is dedicated to Daria Followhill, Melody and Jamie's daughter. But we also discover Knight, Dean and Rose's son but also Vaughn, Vicious and Emilia's son. As for Luna, Trent's daughter, even if she is not very present, she undeniably makes me want to discover her.

Daria is a character I loved discovering. As soon as we read the prologue, we understand the atmosphere is going to be epic and we see that she always spells it out and she seems to be a very nasty girl who acts as if she were the queen oh All Saints High . But all this is just a facade or the tree that hides the forest becauseshe hides a lot of things behind her armor. I can tell you that my heart has tightened many times when discovering her story, her evolution, her personality and her feelings. She will bear a lot of things from an early age and I think she defended herself admirably with the weapons she had. She is an 18 year old teenager who will make many mistakes but who will pay the highest price . I loved the relationship she has with her father Jamie because she often moved me, especially in a certain scene that made me shed some tears. I was surprised and stunned by the attitude of another key character because I didn't expect that from her and I was slapped in the face b her attitude. This situation aroused in me strong emotions, oscillating between anger and hatred but once again the understanding came later.

She pretends to give a certain image in high school and we will learn some of her secrets. When Penn Scully enters her life, it will be an extra pain as he became her worst enemy since she was only 14 years old when she met him. Four years later, hatred has steadily increased and the time for revenge may have come. In her family, we also discover her sister Bailey who is a sunshine and a real chatterbox. With her there is no doubt, you never get bored. The two sisters could not be more different but the tensions will not be as sharp as between her and Penn. The past seems toslap her in the face and to make her pay for her sins. Redemption doesn't seem to be there yet and you have to be careful not to burn your wings. As captain of the cheerleaders' team, she will witness the clash between the All Saints team and the Las Juntas team. When two worlds collide, the damage could leave indelible marks.

Penn Scully is a great character I loved both his past and psychology. What's great is the fact that we also have his point of view and this allows us to know his darkest thoughts. Everything could have started well between him and Daria if there had not been Via, his sister, and his very tense relationship between the latter and Daria. The "crime" is very deep and neither time nor trials can appease the different. The game is only beginning and it will be necessary to choose precisely its camps. Penn wants to do his best to get out of his very peculiar family context. Whether Rhett or his own sister, the choices will be crucial and some secrets will absolutely have to be kept. His talent as an American football player will probably be what could save him but still it would be necessary that this hothead take the time to think instead of rushing ahead.

He also made feel deep emotions and I had only one desire: to try to decipher him because his attitude is often ambivalent and we don't really know if we can trust him completely. His family context is very tense and very peculiar. He is not from the same world as Daria and when he must live at her home, the tensions will be even more strong. I won't talk about his mother or his father to spoil you but just know that it is tough.. He plays American football and it will undoubtedly be his ticket out of this very difficult context and a futurewhich could be a little more bright. He is bound to have a strong love for his sister Via because they are twins, but he takes his protective side very seriously. They know how to give fists to defend themselves but we also feel that they want to get out of it. His vengeance will no doubt be a poison that will sink in his veins and prevent him from seeing more clearly. He will make some choices that will guide his life as a man and he will have to stay on his grounds up to the end to keep his mouth shut.

In short, I can give you only one tip: go and read Pretty Reckless because I read it without stopping it once.  The tension was present throughout my reading and I took my time to immerse myself in this special atmosphere. These totholes won't stop surprising us and I'm looking froward discovering each children's stories . Daria and Penn are awesome, tortured, suffering, wrong, but you'll love them.