LOVE ON THE TRACKS 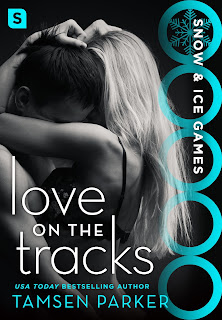 Welcome to the Snow and Ice Games where the competition is fierce and the romance is HOT.
Rowan Andrews is the unexpected darling of the Denver Snow and Ice Games. Luge has never captured the American public’s imagination as much as figure skating or even hockey, but her outsized personality and dare-devil ways have got everyone’s eyes glued to the track. Including a certain chart-topping heartthrob.

Zane Rivera is the lead singer of License to Game, the hottest band in the country. When Zane finds out Rowan Andrews has had some complimentary things to say about him, he arranges to meet her while he’s in Denver enjoying the games. And when a photo of him kissing Rowan on the cheek goes viral, they both see the advantages of faking a relationship for the publicity.

After Rowan’s injured in her final race, their relationship starts to feel all too real to Zane. But is this rock star ready to fall in love? 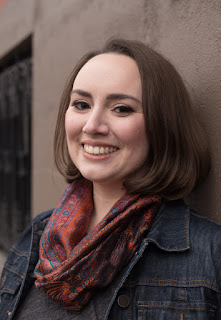 Author Bios
Tamsen Parker is a stay-at-home mom by day, USA Today bestselling erotic romance writer by naptime. Her novella CRAVING FLIGHT was named to the Best of 2015 lists of Heroes and Heartbreakers, Smexy Books, Romance Novel News, and Dear Author. Heroes and Heartbreakers called her Compass series “bewitching, humorous, erotically intense and emotional.” She lives with her family outside of Boston, where she tweets too much, sleeps too little and is always in the middle of a book. Aside from good food, sweet rieslings and gin cocktails, she has a fondness for monograms and subway maps. She should really start drinking coffee.

Excerpt from Love on the Tracks copyright © 2017 by Tamsen Parker

When I see the now-familiar black Land Rover idling by the corner, and the rear driver’s side door opens to let Zane out into the chilly evening, it doesn’t feel so complicated. He smiles at me, and rubs his bare hands together—guy should invest in some gloves before he starts going to the outdoor events.

I don’t know where it comes from, but that bold part of me wells up and swamps all my doubts and insecurities. This is supposed to be fun. I’m supposed to be having fun. What would be fun would be to kiss the incredibly good-looking guy who’s smiling at me as though I’m the only person on earth even though I’m well aware of being trailed by half a dozen photographers.

So I walk right up and lay my mittened hands on his chest and go up on tip-toe to kiss him. His scruff brushes against my chin, and his lips move against my mouth, and then his hands are in my hair. My hair. He’s never done that before, and the way his fingers thread through my hair to sculpt around my head and hold me fast to kiss me . . . I’m accustomed to adrenaline rushes. Half my life is spent trying to go a fraction of a second faster and risking my life to do it. There’s not a whole lot that can beat out hurtling down an icy tunnel and barreling around corners with five Gs pulling at you, but this might be it.

Flashes are going off, and I can hear the crowd starting to form around us. As much as I’d like to keep kissing Zane, we’ve got to get out of here. He must feel the same way because he doesn’t resist when I break off our kiss, only lays a hand on my lower back to steady me and then help me into the Land Rover, waving at the crowd and smiling as he does.

Is this his life? I can handle the attention for concentrated bursts, but for Zane it may be more like a years-long slog with extra crazy sauce drizzled on top when they go on tour or to an awards show, or apparently when they kiss SIG athletes.

Once he’s firmly shut and locked the door and given the driver the go-ahead, he turns to me. Cups my jaw with a hand and runs his thumb over my cheek. It’s the sweetest way anyone’s ever touched me and it makes all these gooey romantic feelings drip out of my heart and spread through my whole body.

“You okay, Row? You look a little shell-shocked.”

That’s how I feel. Or like game being chased by a pack of well-trained hounds. Yeah, I suppose it is open season on us right now. I’m so unsettled, I can’t even really enjoy that he called me Row, just like I’d fantasized he would. “I’m okay, I’m not used to . . .” I wave to the people still crowding the car, trying to snap pictures with their cellphones and long-lensed cameras through the tinted glass. “This.”

Zane’s hand falls away from my face, and I wish he would put it back. Instead, he reaches over and buckles my seatbelt before tucking me under his arm—well, as far as the seatbelt will allow. “I don’t think people ever get used to it. At least the people I know don’t. Sick of it, yeah, but it’s always shocking, always makes me tense up, you know?”

He shivers, probably in an exaggerated way to make me feel better. It does. And the way he called me Row, which I’m getting to relish while replaying it in my head. That’s the first time, but I hope it won’t be the last.

“Still want to go to the movie?”

“Yeah, I’ve been looking forward to it all day.”

He smiles that charming smile and it makes me wonder how many girls he’s smiled at like this before. Probably a million. He’s only picked me to smile at for now because it’ll sell him some records. Well, that’s fine. We can have fun while we play the media.