Fallen Saint, the amazing sequel to Bad Saint, from All the pretty things series by Monica James 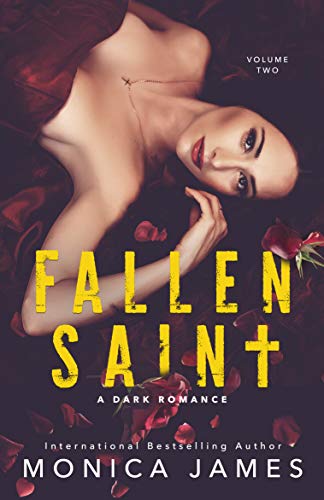 Just as this nightmare began, I once again find myself bound, destination unknown. However, this time, my kidnapper is the man who shattered my world beyond repair.

Aleksei Popov—Russia’s number one mobster, and the man I was sold to.

His intentions for me are clear—submit, obey him, and call him master—but I won’t surrender. I’m not like the other girls. Whether that’s a blessing or curse, I’ve yet to decide. The problem is, my disobedience intrigues my captor all the more.

When we arrive in Russia, the rules change.

Saint, the man who was once a sinner, is my only salvation. What was forbidden now gives me hope that there is light in the darkness. He will risk everything to set me free.

But behind these opulent walls, things aren’t what they seem, and when the fine line between pleasure and pain begins to blur, only one thing matters—saving my soul.

I will lie.
Cheat.
Steal.

I was once an angel, but now…I’m a fallen saint, ready to inflict my own pain and burn this hellhole to the ground.

FALLEN SAINT is a DARK ROMANCE containing mature themes that might make some readers uncomfortable. It includes kidnapping, captivity, strong violence, mild language, and some dark and disturbing scenes.
This twisted tale is not intended for the faint of heart…it will steal your soul.

I thought I was baffled by the first volume of this dark romance series Bad Saint because the level of this novel was excellent but I must say that Monica James provided a higher plot in this new volume . I thought that my heart was going to burst out due to the various twists. I became more and more attached to these two tortured heroes, dealing with their own demons, while discovering another character who will manage to surprise us.

Willow Shaw will have to fight again to stay alive while being once again held prisoner. Despite the epics she experienced in the first volume, she must now face Aleksei but not only him. The latter reigns over a sort of Russian mafia and Saint will have to adapt his plans to try to save the one girl for whom he now seems to have deep feelings. I am always so admirative of this female character because she will try to fight with the means she has while trying not to give in to darkness. Once again, she will be torn due to the boundaries between Good and Evil, but she knows that she can always rely on Saint to help her leave this cage. She will also discover a new enemy with Zoey Hennessy whom I wanted to slap continally.  The tension between them will be strong but she will try to defend herself as best as she can. She didn't choose the position in which she is and she is only a puppet in the hands of a man she can't control. She will also have to show how intelligent she is by deciphering the help that Saint tries to bring her. Fate seems to take pleasure in making fun of her and she will once again have to grit her teeth and try to survive these new ordeals. Who can she really trust?

Saint Hennessy is a character I absolutely adore. Even if he will be less present than in the first volume, we feel that his presence remains in everyone's minds. He will have to play his part without making the slightest mistake that could cost them a lot. He knows a lot of secrets about the world surrounding Aleksei Popov and it's like he's holding a grenade in his hand, ready to blow everything up. This man is so full of resources that we will be surprised more than once by the way things are going on. I have often been stressed throughout this novel because I feared for his life many times. He obviously has a sense of sacrifice and he has only one goal in mind: we will be aware of it from the beginning but we hope that it can lead to a positive outcome. He thinks he no longer deserves to be loved and he lost his "humanity" . However ,  in Willow's eyes, it's not true. We will also have a closer look at his relationship with his sister Zoey and it seems like he has to make a crucial choice at some point.

Aleksei Popov is also a character who will be highlighted in this new volume. I would have liked to tell you that I really hate him but I'd lie. Like Saint, he has "circumstances" that seem to explain why he is whoever he is. Either he is a wonderful manipulator, or he is really sincere about what he will reveal us. The doubt is obviously very present and I still can't decide on him. I want to believe he is really sincere but at the same time does he deserve some redemption? He has dirty hands as Saint has and yet my forgiveness would be more easy for the latter. So I'm wondering what the future holds for him given the conclusion of this volume and I hope that we'll be able to trust him.  The complexity of this character is very interesting and I really want to know more about him.

Thus, the intensity of this dark romance goes up a notch and Monica James offers us a second volume even more awesome than the first one. I enjoyed my reading and I was very very afraid for our heroes. The questions are still very important, the doubts intensify and trust becomes more and more rare. This ending is just amazing and the twists in the plot are very well adapted.