Heartland : A perfect friends to lover romance in the True North Series by Sarina Bowen 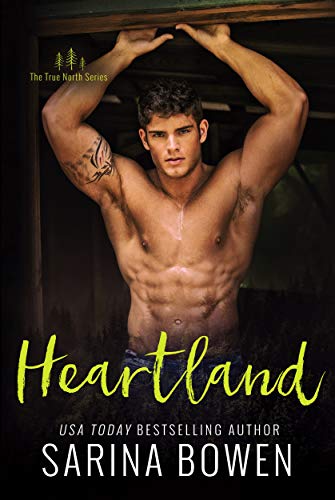 An emotional friends to lovers romance full of risky secrets and late-night lessons in seduction.

Dylan is my best friend, and the only person in my life who understands me. He doesn’t mind my social awkwardness or my weird history. The only glitch? He doesn’t know that I’ve been hopelessly, desperately in love with him since the first day we picked apples together in his family’s orchard.
But I know better than to confess.
Now that I’ve joined him at college, I’m seeing a new side of him. This Dylan drinks and has a lot of sex. None of it with me.
Until the moment I foolishly ask him to tutor me in more than algebra…and he actually says yes.
One crazy night sets our friendship on fire. But now my heart lies in ashes, and nothing will ever be the same again.

I have been a fan of the True North saga from the start and it is a real pleasure to dive back into this family saga and find characters we have discovered and adored in recent years. Dylan Shipley is a character who made me melt in this new volume and the story of Chastity is really very interesting.

Before giving you my spoiler free review, I'd like to thank Sarina Bowen and Jenn for allowing to be part of Sarina's ARC Review Team and for reading as an ARC this new book in the True North Series

My opinion on previous volumes

Dylan Shipley is thus one of the last members of the Shipley family we still have to fully discover. He has a twin sister Daphne but it is more particularly with his brother Griffin that he maintains tensed relationships. I must admit that at times, the hero of Bittersweet, got on my nerves. Even if we know how serious and rigorous he is in his work, I found him cold, hard and unfair with Dylan. If in his love life, Dylan is absolutely not serious, his investment in the family farm is undoubtable. He comes back every weekend to give a hand on the farm and dealing with both his studies, and this rigorous work can't be taken lightly. So when Griffin reproached him, sometimes in an unjustified way, I didn't like this aspect of his personality but that didn't make him hate either. He is under pressure but in doing so, he puts in its turn pressure on a young man who still doesn't know what he will do in his future career. Will he continue his studies? Will he do it in an area likely to be helpful to the farm? Will he also take over the family farm? So many questions but a total blur and the continual reproaches of his brothers won't help him see more clearly. However, we feel he is invested and his idea to use the extra goat's milk shows that he isn't that stupid.

In his love life, we can say that Dylan has been very faithful and that his current girlfriend seems to be perfect for sex but not for love. We feel that our hero doesn't want to invest himself emotionally and we will understand the origin of this issue a bit later by diving back into his personal story. It must also be said that Kaitlin is such a painful girl.  If Griffin annoyed me, this young lady made me want to murder her. We don't understand how this young man decided to stop his flings to be with her. Everyone sees that she isn't great for him but he is the only one to be blinded by their fulfilling sexual intercourses. She will be very cruel to our heroine but also very haughty and selfish towards her boyfriend. She can't accept to be forgotten by our hero and the modest origins of Dylan won't be an asset in her eyes. She will reproach him to be away on weekends but he can't be both working at the farm and hanging out with his girlfriend. Dylan is also a very good friend to Chastity and he will be able to help her with her studies. I loved his friend Ritchie so much and I will be so happy if a next book is dedicated to him because this future psychologist will always have the right words to help our hero. Hopefully he will open his eyes before it is too late because he could miss a great story.

Chastity Campbell is a 21 years old young woman who has discovered the modern world for only two years. She suffered like Isaac and Leah from the sect she was born into and we know that she was marked by her years there. She was marked literally as well as figuratively and she is in need of reference. She developed a truly sincere friendship with Dylan and our heart suffers by her side when we see that she seems to be only seen as a sistero by our young hero. She knows how he behaves with women and yet, she seems to see him from a different perspective than the others. Unfortunately, she will be Kaitlin's roommate and she will be hurts by her mean words. She has no self confidence and words will hurt her more than a simple slap in the face. She has already suffered physical violence but the wordly violence will be even more terrible. She fled from a world that had pinned her as a slut and she is still trying to fond out who she really is

One thing is for sure, she wants to give herself the means to succeed in her career and she is not going to spare her efforts. Her studies will therefore be very engaging and sometimes very difficult. Fortunately, she can rely on Dylan to help her when math problems are too difficult to be solved. If he could also help her with her heart problems, it would be great, but he doesn't see her that way. I liked the relationship she will build with Ellie, in which she can find herself. Indeed, the latter doesn't look like anybody else because at only 17 years old, she is brilliant and is about to finish her university studies. A bit like Chastity, her social life is non existent and they will therefore be present for each other, even in shipwreck situations. We hope that Chastity will dare telling Dylan how she feels and have an open heart discussion with him because she seems to be the only one to read him as in an open book.

Thus, once again, I enjoyed so much my reading of Sarina's new novel This book allowed me to have some news from some former characters while discovering new very interesting ones. If the theme that unites our two heroes is something that we have already read in romance, that does not prevent us from melting with these two heroes who could be happy together if they only dare opening their heart

If you want to order your copy, click above